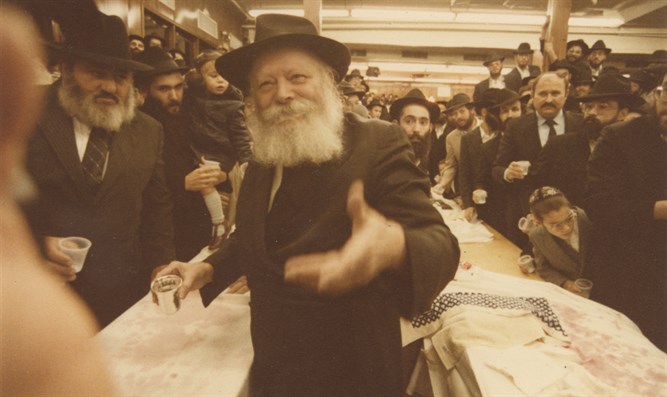 What is a Rebbe and how is he different than a rebbe (lower-case r) and a rabbi?

The latter two are merely teachers, people on equal footing as you but who have knowledge you don’t. That’s why you study with them, to learn and grow your knowledge and character.

A Rebbe is different. A Rebbe — as defined by the Tanya — is composed of fundamentally different properties than normal humans are. What he has isn’t merely knowledge but personal experience with that knowledge, the experience of God. People are thus attracted to this man; he seems to have the answers that they all seek. And if he doesn’t always have the exact answers, he at least is a beacon of stability and moral strength in this rudderless, nihilistic world.

Because he is different, he operates differently. Unlike with a teacher, there is no disagreeing with a Rebbe; it simply would be illogical to disagree with the man most in-sync with truth. His relationship with his disciples, therefore, is one of clear hierarchies. In fact, he has no students, only followers. Students think critically and are only devoted to their teacher insofar as he teaches them. Followers follow their leader irrespective of personal desire or conviction. Although they may submit themselves of their own conviction to his leadership, individual choice ends there. Such is the nature of the relationship.

Accordingly, military analogies are prevalent in the Rebbe’s teachings. He is the general, and his followers are the footsoldiers. Now, foot-soldiers may not question their commander — they must follow orders.

Yet, how many people remain foot-soldiers their entire lives? Is it even possible? For the independent thinker or operator, the life of the foot-soldier can become increasingly stifling and dehumanizing. Every request must be approved by his superiors. There is little personal space, physically and metaphorically.

Is this desire for freedom normal or abnormal? Surely, volunteering to serve one’s country and abstaining from personal enjoyment is noble, but it isn’t a sustainable model of life. Normal humans need order and normalcy; they need to waste time and make stupid decisions that they grow from. The desire to leave the army at the end of one’s tour of duty is normal and indicative of a functioning human being desiring to express his autonomy.

One cannot abdicate his responsibility to the Rebbe, however. For the duration of his life, his will must be either transformed to the Rebbe’s or suppressed. Simply put, the relationship between a Rebbe and a Chossid is a life-long hold on one’s self-expression.

That is, unless there is another way of viewing this relationship; unless the Rebbe is not more than he actually is. If the Rebbe is simply a teacher, one who transmits information to me — another equal human — then one can relate to him within the self. One need not suppress his questions; one need not surrender himself unconditionally.
The loyal followers will say, “what sort of heresy is this?” They will charge me of changing “objective facts” about the Rebbe’s nature because of my own feelings. Ultimately, they will either rebuke or dismiss me and my new-fangled ideas.

So what are people like me to do? People who have been through decades of self-abnegation, been through Yeshiva, Shlichus, Samech Vov, Tahalucha, and Tishrei in 770? People who can’t be responded to with a JEM story; people who are insiders but have outsider feelings? To this you have no sufficient response, and you never did.

I love the Rebbe. He is a once-in-a-generation leader. But, to me, he’s no God. He’s human. He’s my teacher.