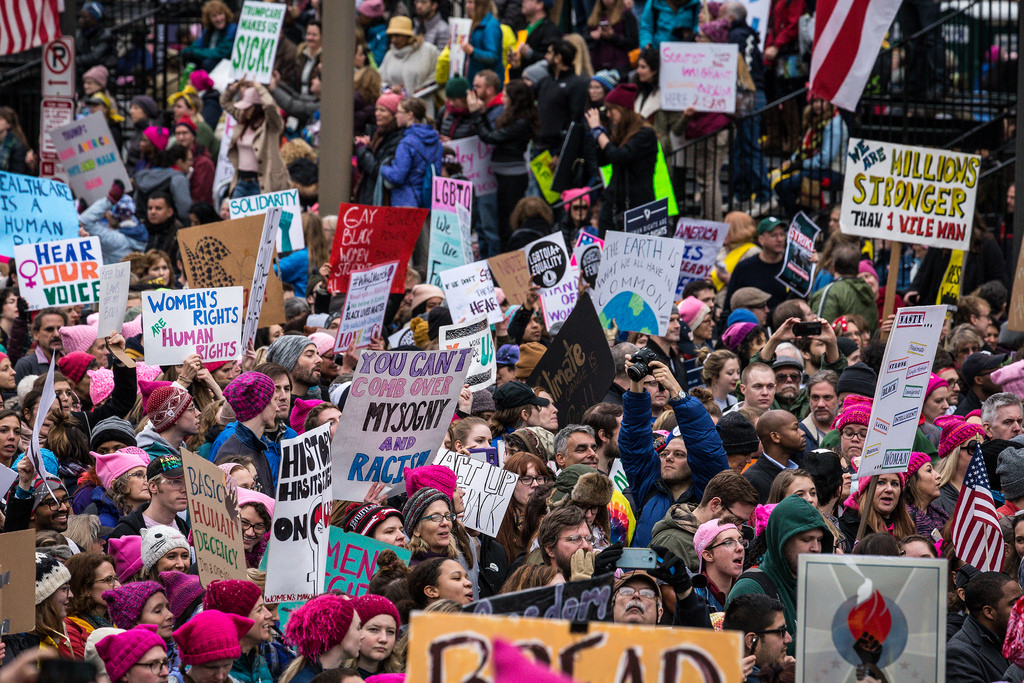 As Shabbos ended my feed flooded with images of women worldwide armed with signs, voices raised in opposition, which seemed to be an visceral reaction to Trump’s Inauguration. The Women’s March on Washington, at first glance, from a chassidic women’s perspective seemed crude and brazen, from the pu**y hats to the obscene language. Honestly, being a working mother with a large family I am way behind on current events and had no idea that the march was even happening until after the fact.

Would I have gone if I’d known about it?

Would I have gone if it was not on Shabbos?

Understanding the controversy from the March, the unsettling donors, the leftist speakers who don’t align politically when it comes to Israel. I understood this. Just as when it came down to election time, I felt in my gut that Trump was not a good candidate, but voicing that opinion in my community would cause controversy. Guilt over the fact that he might be better for Israel, than Hillary was the driving slogan amongst many chassidic communities. Is Trump a good role model for my children? Was Hillary any better? Does the right President need to be a role model? Just like my secretly siding with Hillary, this March seemed to represent an affront to many in my community.

Once I got past all the obvious obstacles and got down to it, was the March meaningful? Did it serve a higher purpose? As my husband and I argued over it’s validity he countered “Can you honestly tell me you feel oppressed in this country, when there are women worse off than you all over the world?”

Because someone has it worse than me, that means I cannot have it better?

Yes, personally I am not physically oppressed. My circumstances are ideal, I get equal pay and have an marriage partner who does not try to lord over me, but that does not change that there are women in this country who do have it worse.

In my community girls are taught as young as 3 to dress tzniyusly. This burden/blessing falls on women. What stayed with me forever was the moment that my Chumash studies Rabbi, teaching a class of 14 year old girls, taught us; If one is raped in a field, the victim is free from blame but if one is raped in a city, the victim pretty much had it coming. Early on we are indoctrinated to take the blame, its where we go, who we talk to, what we wear that can get us hurt and more importantly, it will be our fault.

We are taught how not to get raped, but why are boys in yeshiva not being taught, not to rape?

Schooled on modest mannerisms to appropriate accessories. Instead of building on our strength, daily hypotheticals were imparted, “If you’re walking alone on a sidewalk and a man is walking towards your direction, you are obligated to cross the street. You are responsible for his untznius thoughts otherwise.” I took these lessons to heart. I took the sole blame and responsibility for others weakness. One night, I was standing outside of my building alone fully tznius and a chassidic man, hat and all, holding a stack of sefarim, propositioned me to go to a to hotel with him. I immediately ran back inside the building. I blamed myself, it must have been what I was wearing. I threw away those clothes out of shame. For weeks I felt the burning embarrassment whenever I walked outside because I felt that I might be dressed too provocatively. I wish, that I could say that this was an isolated incident. From being molested by a father, who was giving me a ride back from a baby sitting job and when I confided in an adult about it, the response was “Why were you sitting in the front seat?” Again the blame laid on the victim.

Body shaming, speech shaming, thought shaming. I am still ashamed of my body. To the point that I cannot make eye contact with a member of the opposite sex that is not related. Ironically this shame is only associated around religious men. When I first ventured off to the secular workplace, that was the first time I felt at ease, free from guilt and judging stares. It took me years to be sexually comfortable with my husband, since I spent my entire life only feeling guilty about my body. Even women’s most intimate moments are governed by man made doctrines.

The Talmudic story of Bruriah troubled me. Bruriah the wife of Rabbi Meir Ba’al HaNess, was a great scholar in her own right, known for her intellect and comparable to any male scholar of the time. In school we were taught that Bruriah is the reason why the woman’s role is to teach Torah in her home and not be outside the home, since even the most pious can fall to temptation. She is the only woman mentioned several times in the Talmud. Her only vice, according to the males of that era, was her hubris or what one might say today, her superiority. This made men just plain uncomfortable. This sharp tongued, revolutionary woman’s gravitas seemed too much to handle in Talmudic times. So, her husband Rabbi Meir, had one of his student’s try to seduce her in order to take her down a peg and teach Bruriah a valuable lesson; a woman’s weakness. Unfortunately Bruriah failed her test and upon learning that her husband, was the mastermind behind it all, she committed suicide. Shame killed her. Her crime being indecently intelligent.

If the March did anything, I hope it inspired even one woman to have a voice. I will March to inspire those that can’t March. Yes many of us are not oppressed, but that does not mean oppression does not exist. Some of the worst oppression is hiding in plain sight, among our most sacred institutions.