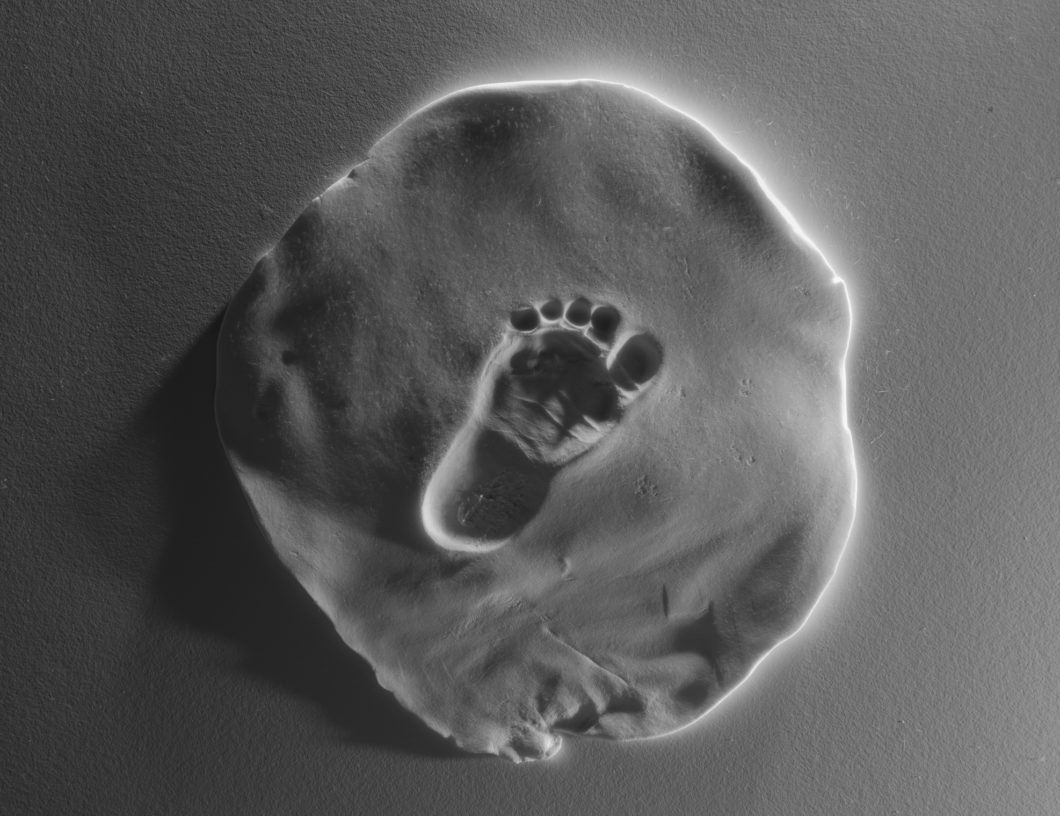 I ate the prenatal vitamins that smelled like cough syrup and made me gag. I bought, I cooked, I ate organic food. I replaced my soaps and shampoos for paraben-free and phthalate-free and useless. I dropped the perfume and the makeup. I exercised.

Twenty week appointment at the doctor’s office. A sonogram. Routine. It’s twenty weeks in, so you start to relax. You start to pick out the baby clothes.

The sonogram showed something that wasn’t routine. It was small. The MRI showed nothing. So I started sorting through the baby clothes.

They understood it now. A genetic disease so rare they don’t test for it. What it meant was that my child would be sick and would never get better. There was no way to tell how sick before birth. But it would be anywhere from shitty to fucked.

I didn’t know how to pray about a child who doesn’t have a name. Now, I do. My prayer is Avraham’s: an argument with the judge of the world.

My husband and I talked with each other. I talked with the relative who is a parent of another special needs child. I talked with representatives of the organization devoted to fighting the disease and helping those with it. I spoke with parents of the children who suffered; none would trade their babies for anything, or wish them unborn; a few, privately, told me to get out while I could; a few confessed they wished they’d had a different life. My relative offered to drive me to the abortion.

I spoke with my yoetzet. She told me to call the rabbi. I called the rabbi. He called his rabbi. The rabbi gave permission.

So I went down to Maryland. I went, and saw the doctor who flies back and forth from Maryland to Nebraska and sees so many women each week. The only abortion clinics who will perform abortions this late are one clinic per state in Maryland, New Mexico, Nebraska, and Colorado. Dr. Leroy Carhart has the kindest eyes and gentlest manner I have ever seen in a doctor. He said he wanted to “make this a million dollar experience you never want to repeat”. He did. He and his staff did everything they could to help me. He and his staff were the best medical staff I’ve ever seen.

The other women and I spoke, a little. Our stories come out in pieces. Our fetuses were given a lethal injection and born whole.

Some, like me, found out their babies would be terminally and severely ill so late because it’s so hard to diagnose earlier. One found out she was pregnant after her birth control failed and her medications had poisoned her baby. There was the girl, maybe fifteen, with old eyes. There was the woman who had three living, a year at most between them, who could hardly hold herself up. Read the stories. Not the ones from the pro-life groups.

And when my child was born dead, they wrapped her little body up in a little pink blanket and gave her a little pink hat, and laid her out so gently in a little basket, like she was sleeping. They let me see her, hold her. They helped give me a box so I could bring her back up to the cemetery where she’s buried near my grandparents. Nechama Comfort helped arrange the funeral and burial. I have her footprints and an empty crib. I put the baby clothes away. There was no shiva.

The nice lady from Nechama Comfort who doesn’t like to judge told me I was just thinking of my baby.

You’ll read this and it’ll hurt, and it wouldn’t hurt if it weren’t true. I know families with special needs children. Many of the siblings are special, giving. A lot of the other ones seem emotionally stunted somehow. My husband worked with the special needs children and most of their parents either had rocky marriages or divorces. My job is the one with the health insurance and I’d have to drop out to take care of my child.

I’ve known too many social workers with horror stories of the foster system, and there are stories coming out about adoption, of children getting traded off after adoption. This happens to the healthy children. What chance would a child so ill have? Who would be patient with her?

If you care so much that I had an abortion, where is your crusade to help the abused foster children, the abused adopted ones, the ones in the class who get lost in the system? Are you calling congress every day about the ones lost from their parents on the border in Mexico? Helping to reform the school to prison pipeline? Reforming the child labor system that brings us our produce grown in the United States of America? Working to help the children kept in psychiatric hospital who have finished their time to leave and find homes? Fighting child marriage?

Are you making your schools and churches, temples and stores, a safe place for special needs children? Are you working to give everyone health insurance? Help for the children who turn 18 and are tossed out of a system that only helped until then and are so many of our homeless?

And if you care so much about the women having these children, where is your help with our medical bills? Your help with our delivery and NICU bills? Will you be there to help me with my pregnancy and delivery complications? Will you advocate for more maternity leave so I can be there for my child?

If you call yourself pro-life, then why aren’t you helping women and children who are alive?

Ancient Greece gave medicine the Hippocratic oath where doctors swore not to perform abortions – and they legalized infanticide in Athens. In 1800s England, when abortion was illegal, there were baby farmers – for a sum, you could pay to have your child taken away, and the infant was then allowed to die. Make abortions illegal and there is a good chance you will find infanticide.

You can’t illegalize abortions. You can only criminalize safe abortions. Many women died of trying when abortions were illegal. Look it up.

When you can show me a world where I won’t be punished first for having my child, and then for having had the child I did, then you can judge me.

When you can show me a world where my child can grow and learn and be loved as she is, then I will regret my actions.

When you can show me a world where you and your children will welcome and care for my child as one of your own, then I will wish she had been born.